Bishop Lorrain was born at St-Martin, Laval County, Quebec, June 13, 1842. In 1855, he began his classical studies in the College of Ste-Thérèse. After receiving the Baccalaureate with distinction, he studied theology at the Grand Séminaire de Montréal, and was ordained in 1867 by Bishop Bourget. After two years’ residence at the college as a professor, he was appointed pastor in Redford, New York. As a parish priest, Father Lorrain was noted as a hardworking pastor, and was praised by his supervisor, Bishop Wadhams of Ogdensburg. Father Lorrain was recalled to Montreal in 1879, and appointed curate at St-Henri, which was known as one of the more difficult parishes of the time. A year later, he was appointed Vicar General of the Diocese of Montreal under Bishop Édouard-Charles Fabre. Here, he succeeded in getting the diocese on a firm financial footing.

After two years as Vicar General, then-Monsignor Lorrain was notified of his appointment as Vicar Apostolic of Pontiac. It had been three years since the community had first petitioned to find a candidate to evangelize the immense territory in Northern Quebec and Ontario.  On September 21, 1882, Monsignor Lorrain was consecrated Bishop by Bishop Fabre.

Yours is all that God has given me of health, of strength, of heart, of intellect–to you I belong not only as your friend, but your servant, For the least among you, with God’s help, am I willing to give all that is left of my life…non recuso laborem–I don’t run away from work. 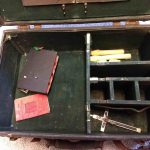 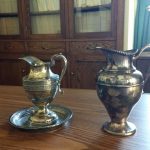 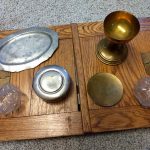 Bishop Loraine’s mass kit, brought with him throughout his ministry, so that he could celebrate mass throughout our large diocese.

On his first voyage, Bishop Lorrain visited the missions of Temiscaming, Abitibi, Moose Factory and Fort Albany. This immense territory was part of the Vicariate of Pontiac until the Vicariate of Northern Ontario and Quebec was founded, later to become the dioceses of Haileybury and Hearst.

In 1898, Bishop Lorrain received the title of Bishop of Pembroke, with the following letter from Pope Leo XIII:

After careful deliberation with our venerable Brethren, the Cardinals of the Holy Roman Catholic Church in charge of the affairs of the Propaganda, we determine to commit the government of the See to you, Venerable Brother, who have hitherto discharged the duties of your office as Vicar Apostolic of Pontiac, in a manner worthy of the highest praise, and have promoted the growth of Christian faith in the field of your admirable zeal and apostolic labours. Accordingly, in the plenitude of our Apostolic power, we sunder the tie that binds you to the titular Church of Cythera, and in virtue of the same Apostolic authority, transfer you by these presents to the aforementioned new See of Pembroke, and appoint you its Bishop and Pastor, instructing wholly to you the care, direction and administration of that Church in matters spiritual and temporal, fully confident that you will do these things for the greater glory of God and the eternal salvation of souls.

The 25th anniversary of Bishop Lorrain’s consecration was celebrated on September 21, 1907. Bishop Lorrain oversaw the completion of St. Columbkille Cathedral, the Cathedral rectory, and a new hospital.

By 1912, Bishop Lorrain was in poor health, and requested the assistance of an auxiliary bishop. The Holy Father named Father Thomas Patrick Ryan, the parish priest at Renfrew, as Coadjutor with the title Titular Bishop of Clozomene. Two-years after Bishop Ryan’s consecration in 1914, he was made administrator of the Diocese, on the account of Bishop Lorrain’s failing health.

Bishop Lorrain died on December 18, 1915 after making an enduring mark on this diocese with a saintly and apostolic life.