History of the Diocese 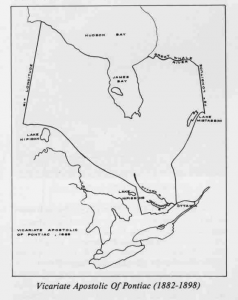 The Vicariate Apostolic of Pontiac was created by a decree dated July 11, 1882, by Pope Leo XIII.

Narcisse Z. Lorrain, nominated on July 14, was consecrated as Bishop of the Vicariate Apostolic of Pontiac on September 21, 1882.

years later, on May 4, 1898, the Vicariate Apostolic of Pontiac was raised to the Diocese of Pembroke. Once again, Pope Leo XIII named Narcisse Z. Lorrain as the first Bishop of this new diocese, on May 6, 1898.100th Anniversary logo 1998, with a silhouette of the Cathedral and a map of the Diocese (On the map, the Ottawa River looks like the Spirit descending as a dove.)

The change meant that the diocese was no longer missionary in character but was now considered to be a sufficiently organized territory. The limits of the new diocese remained the same except for one exchange—the mission of Long Lake, situated north of Lake Superior would fall under the jurisdiction of the Diocese of Peterborough, while the Lake Timagami mission, situated west of Lake Témiskaming, would become the responsibility of the Diocese of Pembroke.

On September 21, 1908, there was a further change, a reduction in the Diocese of Pembroke, when the Vicariate Apostolic of Témiskaming was formed. Finally, a few minor changes, for the sake of convenience, were agreed upon by the bishops of Pembroke, Peterborough and Sault Ste. Marie; these changes were ratified by the Holy See on October 17, 1937.

Learn about the past bishops within our diocese, by visiting the Bishop’s page. 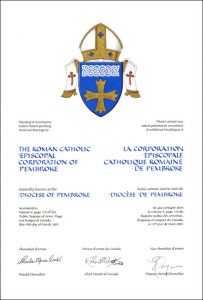 The Grant of Arms was made on March 15, 2007. The celtic decoration represents the artwork in the Cathedral of the diocese that honours Saint Columbkille, the patron saint of the diocese.

The colour blue represents the Ottawa River that joins the two main parts of the diocese and which was a means of communication for the early missionaries to Canada. The colour blue is also associated with the Blessed Virgin Mary.

The colour white represents activity on the water, in the form of the “white water” appearance of rapids and waves created by paddlers and canoes.

The cross is the style that appears on the seal of the Chancery of the Diocese, as well as on vessels and appointments of the first Bishop of Pembroke, the Most Reverend Narcisse Zepherin Lorrain.

The original concept was that of Fr Ryan Holly, assisted by Darrel Kennedy, Assiniboine Herald, and the heralds of the Canadian Heraldic Authority.

Twinning with Archdiocese of Keewatin-Le Pas 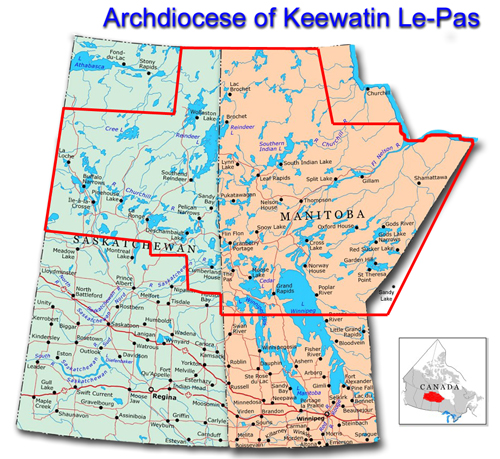 Within recent years, the Holy See has entrusted the dioceses of northern Canada to the care of the more prosperous dioceses to the south. The ‘twinning’ of Catholic dioceses and/or parishes is a partnership initiative intended to build relationships and lead to mutual cooperation and support.

As Archbishop Richard Smith, Edmonton Diocese, explained to the Catholic Register in 2012, “This type of twinning arrangement goes back to the 1990s when Blessed John Paul II in his apostolic letter Ecclesia in America encouraged the dioceses of the Western Hemisphere to consider ways that they may enter partnerships with one another of mutual support.” Charged with looking after our own, a committee in Canada (of which Archbishop Murray Chatlain, Archdiocese of Keewatin-Le Pas, was a member), considered the needs of people in our north and divided the country southern to northern for support. That support can take on a few different forms including: 1. the loan of priests, 2. other ‘human resource’ support, e.g., lay people, communications staff, youth leaders, etc., and 3. financial, explained Archbishop Chatlain.

A few years ago, the Diocese of Pembroke twinned with the Archdiocese of Keewatin-Le Pas. When then Bishop of Pembroke Michael Mulhall and Archbishop Chatlain discussed the twinning, they spoke of working to build relationships, sharing prayer, and learning to understand each other. “It’s delicate in that often people come with good will, but don’t know the culture, history and language,” said Chatlain about the Archdiocese of Keewatin-Le Pas. He suggests that once a particular group is identified—a school, a parish, a community—it’s important that the supporting group takes the time to talk to and get to know the group or community they are supporting, and ask ‘what would you most benefit from’ in order to fill a real need.

The process of twinning is initiated at the level of bishop (his office/administrator) to bishop, so that it can be organized and tracked to ensure that support reaches the gaps and twinning isn’t repeated in one area. “If some people in the diocese of Pembroke have it in their hearts , we are always looking for ‘champions’ and we try to hook them up with champions here to see if some fruit can come from it,” noted Chatlin. The relationships can start simply with prayer, prayer intentions, and phone calls, building up to a visit. “I would encourage some trips—it’s kind of tricky with the distance, but it’s possible. If two or three people came to visit a place that’s open and interested, and participate in the community, a spiritual gathering, they could ask ‘what are you interested in/hopeful for’,” suggested Chatlain.

The Archdiocese of Keewatin- Le Pas, with its remote location, vast territory and unique needs, participates in multiple twinning programs. One partnership involves a youth group from Saskatoon called Face-to-Face, made up of university students. They made a 14-hour trek during their winter break to carry out ministry including confirmation preparation, attending local carnivals, and organizing youth gatherings. The group planned to return again this year to continue building the relationship. In another twinning, a Winnipeg youth group travelled six hours by car followed by six hours on a train to reach an isolated Cree community and work with young people there, organizing a vacation Bible type school. Parishes in Regina have fundraised to help with heating bills for the church and rectory and to assist with a school lunch program for students. “It takes real work and commitment, it’s not easy to do missionary work,” noted Chatlain. Another opportunity to help is through an organization called LAMP (*LAMP is a cross-cultural ministry sharing Jesus Christ with God’s people in remote areas of Canada. https://www.lampministry.org/#/about-our-ministry/) which is always looking for volunteers for its summer vacation Bible schools. Participants are asked to make a commitment over time and to fundraise for travel costs. Currently, many of the volunteers are from other churches and come from the U.S. for an adventure in the Canadian north. “It would be nice to have more Canadian/Catholic volunteers,” said Chatlain. “We would ensure they go to Catholic communities.”